What Time is Bedtime?

If you’re struggling with sleep in your household, your situation may drastically improve with one small but critical change: an earlier bedtime.

Many of the parents I work with have children that are resisting bedtime, waking up frequently throughout the night, and rising early in the morning. While my work with parents does a deep-dive into more than just schedule adjustments, ensuring that children are getting down to sleep at an appropriate time in the evening is an important piece of the puzzle.

So, When Is Bedtime?

99% of the time, it’s between 7:00 p.m. and 8:00 p.m. While I fully believe that all children are different and some tend to do better with a slightly later bedtime, most children over the age of three months do best with a bedtime within this window. But why? Here are 5 benefits of an earlier bedtime.

Five Benefits of an Early Bedtime

1. It’s Easier to Put A Child To Bed Before They Get Overtired

There is a natural dip in our circadian rhythm during this “after-dinner hour” and this is an optimal time to capitalize on the ease of putting children to bed before they get a “second wind”. Think about how tired you might feel early in the evening. You say to yourself, “I’m going to go to bed so early tonight!” But all of the sudden it’s 11:00 p.m. and you’re still on the couch scrolling through Instagram and watching reruns of The Real Housewives and not really feeling all that tired. Why is that? It’s because you got your “second wind”; your body began to pump stimulating hormones into your system to keep you awake after you didn’t climb in bed after dinner. The same things happen with our children when we miss this optimal window. While it’s certainly easier to get children to fall asleep when these stimulating hormones aren’t running through out bodies, there are also several unattractive side-effects that over-tiredness brings with: crankiness, tantrums, power struggles, and behavior issues. Getting your child down before they reach this stage can help reduce bedtime stress enormously.

Being overtired can also lead to frequent night-waking and early rising. With more adrenaline and cortisol (stimulating hormones) and less melatonin (the sleepy hormone) pumping through your body, it is harder to not only fall asleep but also to stay asleep through the night. If your little one is up several times a night or rises before the sun, take a look at bedtime for sure!

The most restorative period of sleep occurs before midnight. Humans sleep in cycles ranging from lighter stages to deeper stages. The stuff we’re after, the really restorative sleep, comes during the deep stages in our sleep cycle. It is during these phases where our brains are replacing vital cells, repairing muscles, and releasing growth hormones.

Deep sleep occurs only at certain parts of the night regardless of what time we get into bed. While kids whose schedules are pushed later may still get the same number of hours as a child who goes to bed at 7:15 p.m., they’ll be getting much less of that wonderfully delicious, deep sleep than their early-to-bed counterparts. Putting your little one down earlier in the evening will ensure they get as much of that rich, good-quality sleep as possible.

4. Early Bedtimes Will Help Ensure You Are Meeting Your Child’s Sleep Needs

Most children from infancy through adolescence need about 10-12 hours of sleep per night. Oftentimes, children who go to bed later don’t actually sleep in much later than 7 or 8 a.m. simply due to circadian rhythm patterns. The ability to “sleep in” does not actually develop until later in childhood. Therefore, an early bedtime of between 7-8 p.m. will ensure that your little one has all the time he needs to get plenty of quality sleep before they awake the next morning.

5. Early Bedtimes Mean A More Relaxing and Peaceful Evening for YOU

When you get your child to bed before 8 p.m., the night is yours! Catch up on your favorite TV show with your partner, take a relaxing bath, or head to bed early yourself! Not only will your child be more well-rested, you will be too!

If bedtime is a battle in your house, take a deep breath and let’s chat. I’ll help make your evenings peaceful once again. 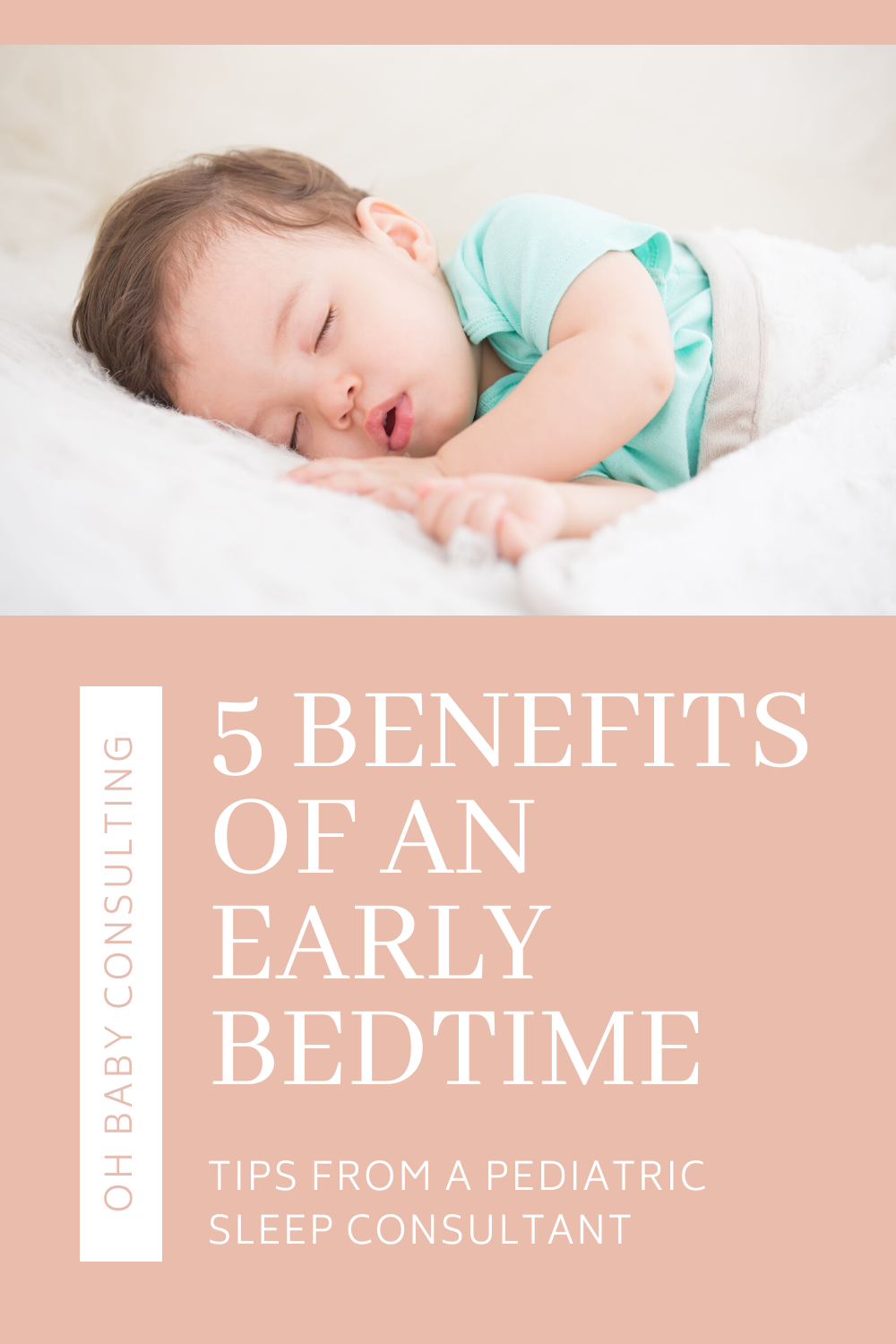