Is your little one sleeping through the night but waking up before 6:00am? If so, know that you are not alone. It is very common for babies to wake up between 4:00am and 6:00am and struggle to fall back to sleep. Typically, at this hour they are in a very light stage of sleep, and because they have almost an entire night’s worth of sleep under their belt, the slightest disturbance can wake them and keep them awake. The drive to fall back asleep is lower, their melatonin levels are lower, and after several hours of sleep already, they feel good to go for the day.

A normal and healthy wake range for babies is between 6:00am-7:00am based on their typical circadian rhythm. Please know that some parents have to wake babies early in the morning due to family schedules. If you need to have an earlier wake time in your household, this is fine. If it works for you, no need to change anything! However, if you are consistently experiencing very early-morning wake-ups and you’re not happy about it, there are a couple different things you can try right away to see if they make a difference.

Here is the checklist I share with the families I work with:

If you haven’t already invested in black-out curtains, definitely invest in some (These are my favorite). Too much light coming in can not only wake a sleeping child but can also interfere with melatonin production (the body’s sleepy-time hormone) and inhibit your little one from falling and staying asleep throughout the night. We are already at our lightest stage of sleep from 4-6am; add some creeping in sunlight to the mix and it’s game over!

Here’s what you need to do: go into your child’s room; close the door & the blinds and let your eyes adjust. Can you see objects around you? If the answer is yes, then it needs to be darker. But if you’re sitting there are you can’t even see your hand when you hold it right in front of your face, congratulations, it’s dark enough.

Darkness doesn’t just apply to any light coming through the window or the cracks in the door. It also applies to lights on devices like the camera, sound machine, or humidifier. If you’re noticing light coming from these sources, use some painter’s tape or even a Band-Aid to cover it up. It may seem nitpicky, but all the of the below strategies will be moot points if there is light creeping in.

Even though you’re not ready to get up, that doesn’t mean the rest of the world isn’t out making a racket. Maybe the sprinkler system starts up or the garbage truck goes by. Maybe there is a family member getting up for work or the neighbor across the street is starting his car. Using a white noise machine strategically placed between your baby’s crib and the source of most early-morning noise can help to block out some of the environmental sounds and keep baby sleeping.

Be Mindful of Bedtime

A leading cause of early-morning wake-ups is overtiredness at bedtime. When the body is over-tired, it produces stimulating hormones (instead of the sleep-inducing melatonin it’s supposed to) which can lead to bedtime battles, restlessness throughout the night, and, you guessed it, early wake-ups. Research consistently shows that for most babies over 3 months, a bedtime between 6-8pm is best to ensure quality, consolidated sleep. I refer to this time frame as the “sweet spot” where babies are most likely to fall asleep the easiest and stay asleep the longest. Typically, a bedtime after 8pm does not help a baby sleep in later in the morning. In fact, it is often just the opposite – babies often wake earlier.

On the flip side, you also want to make sure that bedtime is not too early. I know, I know. I just went on about how early bedtimes are so important for consolidated sleep and helping to prevent early-morning wake-ups. But, if your child is getting a good 11 hours of sleep at night (maybe going to bed at 6:30pm and waking up at 5:30am) you may think about shifting bedtime back slightly to fall between 7-8pm. That way they’re still getting 11 hours, but the “right” 11 hours.

So how can you know whether an inappropriate bedtime is the culprit? The best way to do this is to make sure you’re following appropriate awake windows and then track your child’s sleep for a few days. If your little one has been going to bed at 7pm, try 6:45pm for a few days and see if that changes things. If you don’t see any improvement, you might even try 15 minute earlier. If that still does not yield later morning wake-ups, then you have my permission to shift bedtime 15 minutes later than it was originally (in this example, 7:15pm). Remember to give any bedtime changes at least 4-5 nights before deciding whether or not it’s working.

Sleep begets sleep. Just as late bedtimes tend to yield early wake ups due to overtiredness, too little daytime sleep can compound and exacerbate that overtiredness and lead to early wake-ups. If your child has had a day of “crap naps,” you should consider shifting bedtime up to make up for some of that missed daytime sleep.

Alternatively, getting too much daytime sleep can also cause early wake-ups. (Huh? You just told me sleep begets sleep!) While it’s true that you need sufficient daytime sleep to sleep well at night, there is such a thing as too much of it. Every baby needs a certain amount of sleep in a 24-hour period. If their total sleep needs are 14 hours and they get 4 of those hours during the day, they’re likely not going to sleep more than 10 hours overnight. Sleep is important, but the distribution of that sleep is key. This is most often the case when your baby is ready for a nap transition.

What’s the first thing you do when you hear your little one cry out at 5:00 a.m.? Are you running to them, intervening, maybe even getting them out of their crib for a feed or to continue sleeping in your cozy bed? That’s like Christmas morning every day to a kid – anything is more fun than sleeping – and chances are their body is going to continue waking them up earlier and earlier in anticipation of whatever exciting thing is planned. So, think about what your child is expecting when they wake up early and whether or not you need to adjust how you are responding to them.

If your baby is unable to put themself to sleep at bedtime, it is very unlikely that they’ll be able to put themself back to sleep during the early morning hours. Melatonin levels and the drive to sleep are incredibly low during these hours and it is the most challenging time for a baby to connect sleep cycles. Being able to fall asleep independently at bedtime and fall back to sleep during night wakings is vital to conquering early-morning wake-ups.

Making changes won’t elicit results overnight. It might take a good 2-3 weeks of consistency to see wake-up time shifting to a later hour. But the more you encourage it, the better success you’ll have.

And, as always, if you need help, you know where to find me! 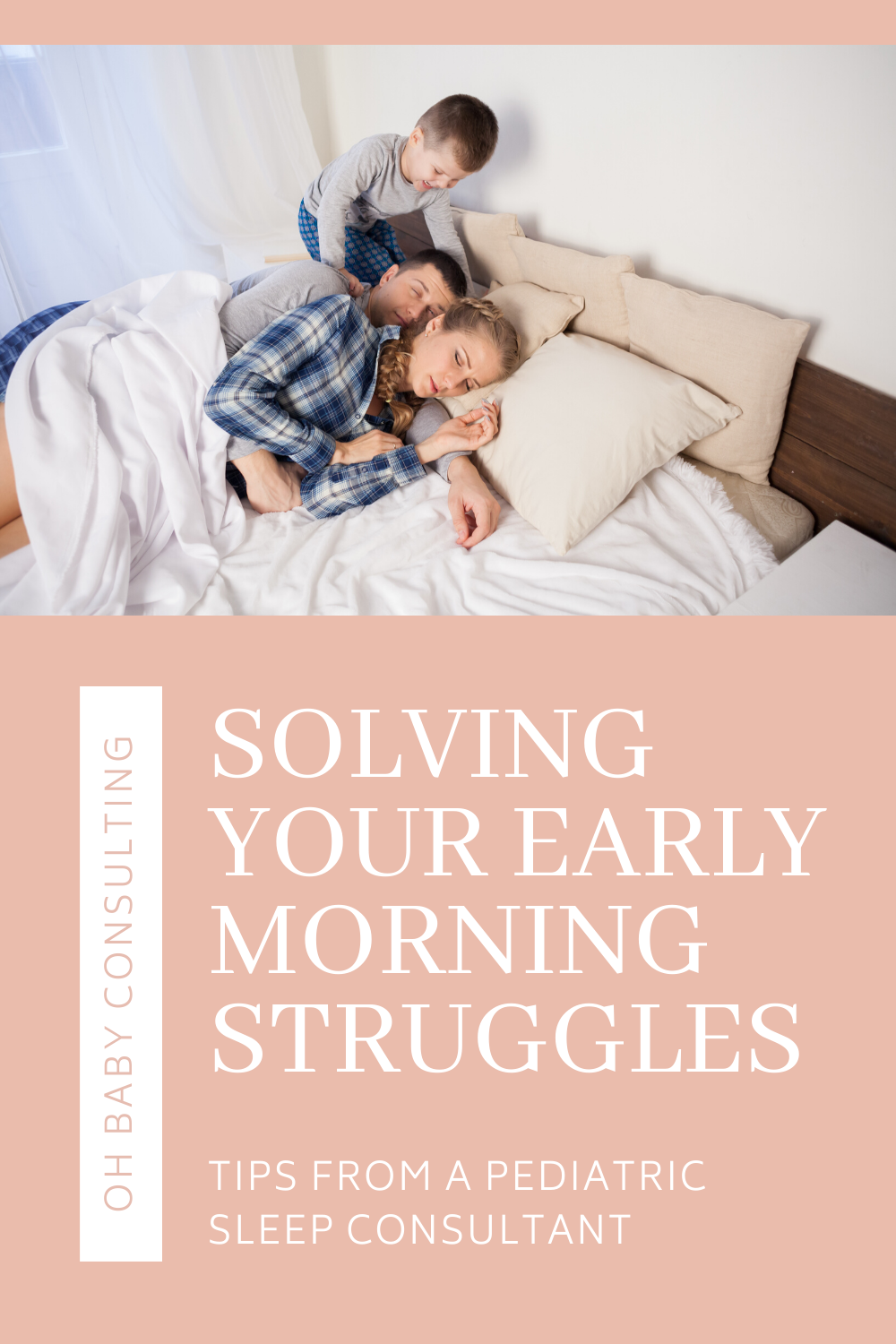